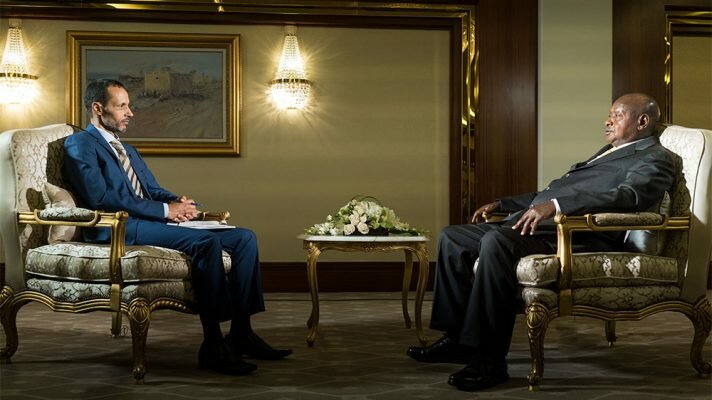 When asked if he was planning to run for another term as president of Uganda, Yoweri Museveni told Talk To Al Jazeera’s Mohamed Vall, “We will follow the constitution.”

Museveni has ruled Uganda for 31 years, with five presidential terms in office. At 72 though, he is three years away from the constitutional age limit to serve as president. He dismissed speculation that he will try to change that limit to extend his term. “I cannot change the constitution because I do not have the power.”

He defended the length of his rule. “Have you heard of something called democracy?” he asked Vall. “Democracy means you elect the people you like. We had elections about one year ago. My party got 62% of the vote. In fact, it would have been more if it had not been for quite a lot of spoilt votes. So that does not show that the people of Uganda are fed up with our party, because they have voted for us five times, winning free competition… My party has been winning. Is that an offence to win elections? What are you worried about?”

Similarly, Museveni denied he would go down in history as a dictator. “A dictator who is elected five times? That must be a wonderful dictator.”

He denied that his party had manipulated the elections. “Why did we lose elections in some districts? It was arranged that we handed some districts to the opposition? Don’t you think that’s ridiculous?”

Museveni also dismissed claims that he is preparing either his wife or his son to replace him. “Why should I prepare them? The people of Uganda will choose the one they want… There is no way I can choose for them, my wife, or my son, or even other people.”

He claimed their current prominence had nothing to do with nepotism. “The few members of my family who are involved, I involved on their own merit. My wife, against my advice, she went and stood for the elections and had the biggest majority in the whole country.”

He also dismissed criticisms that he has failed to raise up leaders to succeed him. “The leaders are there. We are a population of 40m. We have got 130 districts. All those districts need leadership. The parliament needs leadership. The ministries need leadership… The other leaders are there. But to maximise the leadership input, we use all our leaders. The young ones. The older ones…  So my people will decide on the who according to the what, the problem they are facing that needs to be solved.”

Museveni said he needed five terms “to start from zero, to where we are now. We were at zero; we are now able to do things by ourselves.”

He says the biggest issue “was to transform the traditional preindustrial society to the modern era.” He listed a number of his achievements: more than 25% of Ugandans are currently studying, through universal education; covered roads have increased from about 800 to nearly 6000km; and for the first time Uganda has surplus electricity.

He dismissed criticism of the number of Ugandans living below the poverty line. “The people under poverty in 1990 were 56%. The ones now under poverty are 19%. Yes, that’s 1/5th but we have covered 4/5ths.”

Museveni also dismissed claims that freedom of speech is restricted in Uganda, pointing to the number of private radio and TV stations. “Uganda is one of the most democratic countries in the world,” he said. “In terms of free speech, we have something like 250 private radios, which say whatever they want.”

In a tough interview, Museveni also fielded questions about the jailing of opponents like Stella Nyanzi and opposition leader Kizza Besigye; rules preventing people rallying freely; the recent killing of more 100 people by security forces in Western Uganda; and his foreign policy.