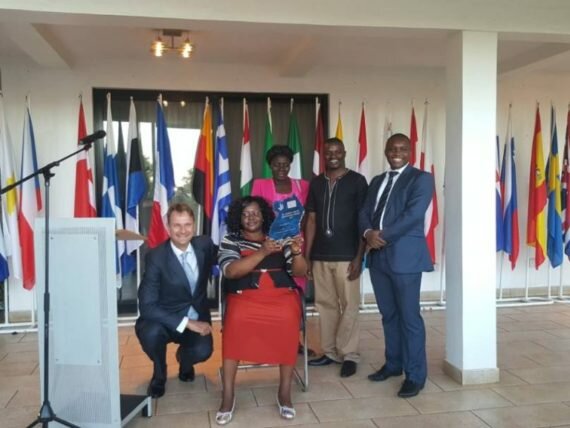 The Heads of Missions of the EU Member States, the EU Delegation and Norway, are happy to announce Ms. Pamela Judith Angwech, as winner of the EU Human Rights Defenders Award 2017.

Ms. Angwech is Founder & Executive Director of the Gulu Women’s Economic Development & Globalization (GWED-G), the region’s largest grassroots human rights organization, focused on women and youth, in 2004. GWED-G has programs in a number of domains, including health, human rights, peace building, economic empowerment and livelihoods, psychosocial support and counseling, and research and advocacy.

In winning the prestigious award, Ms Angwech is recognised for:

The 2017 edition of the award ceremony was hosted under the auspices of the Embassy of the Kingdom of the Netherlands in Uganda.

Speaking at the event, Henk Jan Bakker, the Ambassador of the Netherlands to Uganda said:

“It was the start of a long journey of more than 10 years, without knowing where it would bring you. And it seems to me that you knew very well that the road you took is not important, but the traces you leave behind. And you’ve left many, many traces behind, showing the way forward. Your voice is loud and clear, not only in Northern Uganda but also in various human rights platforms in Uganda and abroad. We, your European allies, are listening to you and we remain committed as your diplomatic Human Rights Defenders advocates”.

Human Rights Defenders (HRDs) are individuals who, individually or with others, act to promote and protect universally recognised human rights and fundamental freedoms. These include civil and political rights as well as economic, social and cultural rights. The work of HRDs has a positive impact on a country’s development and is essential for encouraging the respect for human rights as recognised by international human rights standards and agreements. HRDs need to be protected from interference and reprisals while executing their work. The HRDs rights to freedom of expression, association and assembly need to be safeguarded to enable them to defend others.

An individual eligible for the EU HRD Award is nominated by another individual or organization. Human Rights organizations active in Uganda were invited to nominate candidates for the award. Candidates were assessed by a jury composed of human rights experts of different European Embassies and the EU Heads of Mission.

The EU Member States, the EU Delegation and Norway would like to thank everyone who participated in the nomination process and express their gratitude for the excellent cooperation and the outstanding work of the Ugandan Human Rights Defenders and their organisations.