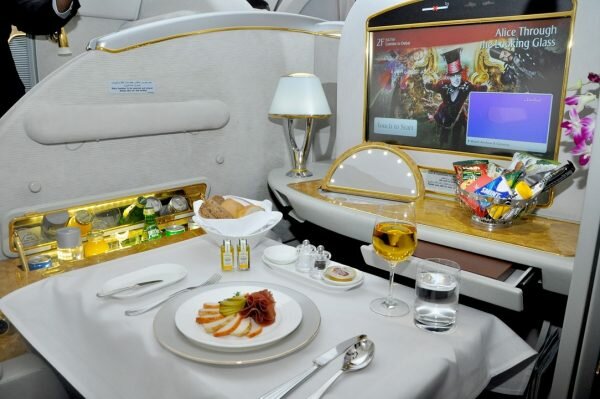 Emirates Showcases Its Award-Winning Products And Services At Entebbe Airport

Posted By: Guest Writeron: October 03, 2016In: FeaturedTags: Emirates
Print
Share this on WhatsApp

Emirates, voted the World’s Best Airline in the 2016 Skytrax World Airline Awards, last week showcased its award-winning on board products and services to Ugandan journalists during a tour of its Boeing 777-300ER aircraft used on the route between Dubai and Entebbe.

The airline previously operated a smaller Airbus A330-200 on the route, but in October last year upgraded the aircraft to a larger Boeing 777, which offers more seats and enhanced comfort for customers. The aircraft, which was on display for media at Entebbe International Airport, has a three class cabin configuration, with eight luxurious private seats in First Class, 42 lie-flat seats in Business Class and 310 spacious seats in Economy Class.

“The upgrade to the Boeing 777 last year was part of our commitment to provide travellers to and from Uganda with the best possible on board experience. The aircraft is the backbone of the Emirates fleet and is very popular with customers. For us it’s all about offering our customers value for money, by providing world class products and services when you travel on Emirates, from gourmet meals across cabin classes to the famed hospitality of our multi-national cabin crew, including Ugandan nationals, and award-winning on board entertainment,” said Mohammad Al Attar, Emirates Country Manager for Uganda.

On all Emirates’ flights, customers can look forward to hours of entertainment on Emirates ice system, which offers over 2500 channels of on demand audio and visual entertainment, from the latest movies, music, audio books and games, as well as family friendly products and services for children, including complimentary toys, kids’ meals and movies, priority boarding for families and the use of free strollers at Dubai International Airport.

In addition to the on-board comforts and products, all customers, including Economy Class, enjoy chef prepared regional and international cuisine, using the freshest ingredients, accompanied by a wide range of complimentary wines and beverages.

Travel must take place between 28th September and 14th December 2016, with a minimum stay of three days and maximum stay of one month at the destination.

Emirates started services to Uganda in March 2000, with a thrice weekly service linked with Nairobi, and later with Addis Abba, until it was delinked in 2007 and became a direct daily service between Dubai and Entebbe. EK 729 departs Dubai International Airport every day at 0920hrs and arrives at the Entebbe International Airport at 1350hrs. The return flight, EK730, leaves Entebbe at 1550hrs and lands in Dubai at 2235hrs.

No top posts yet