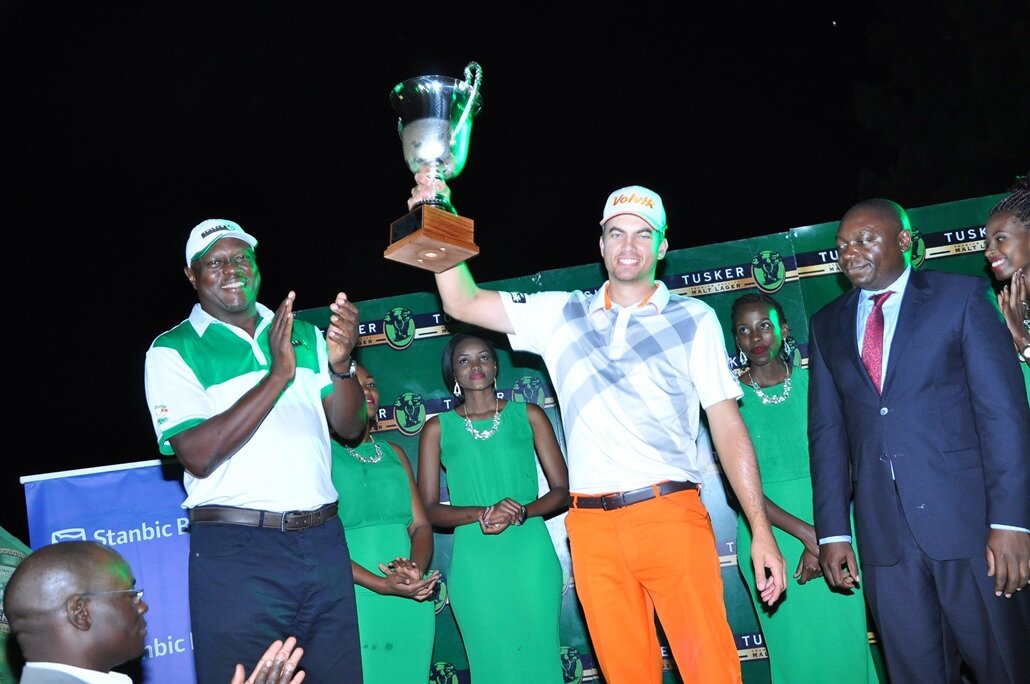 Joshua Seale shows off his trophy

South African pro golfer and defending champion of the Tusker Malt Uganda Open Pros Championship, Joshua Seale, is in town to defend the title he won last year during a thrilling showdown at the Kitante Golf Course. 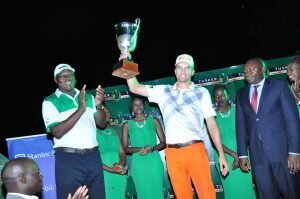 Joshua Seale shows off his trophy

Joshua Seale will be looking to emulate his good fortunes from last year and retain his trophy despite facing tighter competition. He joins a number of more than 50 pro golfers from around Africa who have registered to take part in the 75th Tusker Malt Uganda Open.

Over 35 pro golfers from Kenya have arrived in Kampala to take part in this year’s Open. The tournament has also attracted players from other countries such as; Portugal, Zimbabwe, Zamiba, Namibia, Rwanda and Tanzania.

Some of the notable foreign pro golfers to look out for will be Ferreira Stephen from Portugal, Rwanda’s Dusabe Jules, Kopan Timbe from Kenya. Returning as a pro golfer, Zambia’s Aaron Simfukwe will be looking to make a mark once again in the Tusker Malt Uganda Open.

Simfukwe played in last year’s tournament as an amateur and has since turned pro.

Some of Uganda’s star golfers will include Deo Akope, who won the tournament in 2006 and 2014, Phillip Kasozi, Fred Wanzala, whose recent form hasn’t gone unnoticed.

The pro golfers will be looking to have a lion’s share in the prize money which increased to UGX 145 million from UGX 110 million.

“The Tusker Malt Uganda Open pros tournament is going to be a captivating one as we have the top players from across Africa tussling it out at the Kitante Golf Course. We hope the best golfer wins and we shall be following closely,” said Grace Namutebi, Uganda Breweries Limited, Brand Manager Premium Beers.

Tusker Malt Lager injected over UGX 500 million into this year’s tournament as assurance to show its support for the development of the game golf in Uganda.

There has been an increase in the cash sponsorship from UGX 230 million to UGX 250 million.

Tusker Malt Lager embodies the spirit of the game of golf. Tusker Malt lager is slow brewed with an ingredient base of 100% malt giving it that unmistakably rich, smooth premium taste that is widely recognized and that consumers have grown to love.